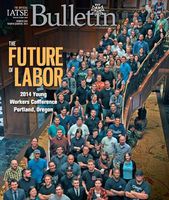 January, 2015 - IATSE 322 is proud of our young workers, and their front and center placement on the cover of the most recent IATSE Bulletin.  Local 322 sent two delegates to the most recent Young Workers Conference.  Lorenzo Mack and Liz Shinkle have brought many ideas and resources to the membership, and are leaders in Local 322.  Previously, in 2012, Local 322 sent two delegates to the first Young Workers Conference in Philadelphia. 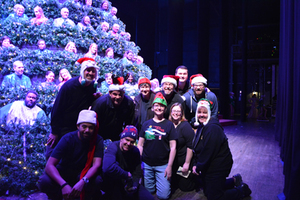 December,  17 2014: The IATSE local crew in Charlotte, NC celebrated with Carolina Voices and their Singing Christmas Tree.  It was a historic performance, and celebrated a significant anniversary.  The 2014 performance was the Singing Christmas Tree’s 60th year, and was one of the first shows performed at Ovens Auditorium during the grand opening season. Ovens was the first stage venue Local 322 staffed, after beginning as a projectionist local in 1914.

This year’s Union crew was proud to take part in the historical event, and looks forward to 60 more years behind the scenes at one of Charlotte’s oldest holiday traditions.

Sixty years after the first performance, Local 322 continues to work at Ovens Auditorium, and nearly every other large performance space in Charlotte.   Earlier this year, Local 322 celebrated their 100th anniversary of receiving their charter on February 13, 1914. 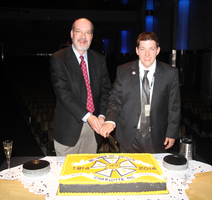 On Monday, May 19, 2014 members of Charlotte’s International Alliance of Theatrical Stage Employees (IATSE) held a gala at Ovens Auditorium to celebrate the 100th anniversary of the local.

International Vice President Walter Cahill, International Representative Dave Garretson and many delegates from District 7 locals were in attendance, in addition to special dignitaries from Local 322’s illustrious past.

P.W. “Mickey” Jenkins, former President of Local 322, bestowed the highest honor of the Alliance on former business agent Bruce Grier, an IATSE Gold Card.  Grier served the local for two decades, bringing growth to the local and continues to provide guidance and leadership.

Charlotte’s IATSE local signed their charter on February 13, 1914, with 21 members joining, and became the 322 local chartered since 1896, when New York City theater workers signed cards to become the Theatrical Protective Union of New York, and created what later became Local One of IATSE.

IATSE Local 322 began as a group of projectionists, working in movie theaters across the Charlotte region.  In the 1950’s, with the construction of Oven’s Auditorium, they began providing the skilled backstage workers required in theater settings, including carpenters, electricians and general stagehands.  By 1960, the membership of local 322 had grown to 33 members.

By the 1970’s, nearly half of the workforce was made up of firefighters, who’s skill at climbing made them excellent riggers at venues such Bojangles Coliseum (formerly Charlotte Coliseum), which is today still the largest freestanding dome, just as it was during its grand opening in 1955.

In its 100 year history, IATSE Local 322 has provided backstage and behind-the-scenes support for events as diverse as the 2012 Democratic National Convention, major concert tours, and movies such as Days of Thunder.

The International Alliance of Theatrical Stage Employes, Moving Picture Technicians, Artists and Allied Crafts of the United States, Its Territories and Canada, AFL-CIO, CLC (IATSE) is the labor union representing technicians, artisans and craftspersons in the entertainment industry, including live theatre, motion picture and television production, and trade shows. The IATSE is the largest labor union in the entertainment and related industries with a membership of over 113,000 members. 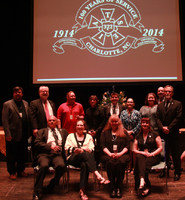 Check out the most recent issue of The Bulletin and the feature on Local 322 on page 72.  There's also an article about 322's success at the Democratic National Convention. It's great to see all of the positive things Charlotte's Local 322 is doing. 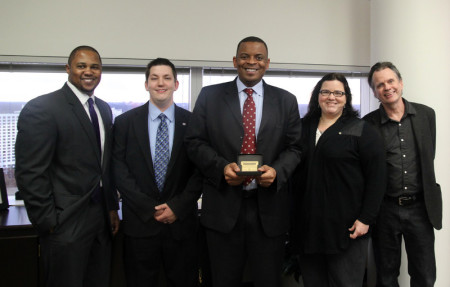 This award is presented to Mayor Foxx in recognition of his support and service to the Charlotte community, and in thanks for his dedication to bringing the 2012 Democratic National Convention (DNC) to Charlotte.

Foxx’s dedication to the City of Charlotte and its residents helped bring the event to Charlotte, and allowed the city to showcase its world-class status, and express its greatness on the world stage.

Foxx is the first Honorary Gold Card recipient of IATSE Local 322 in its 98-year history.  A Gold Card gives Mayor Foxx lifetime membership in the IATSE, a prestigious labor organization which was founded in 1893.

In addition to the jobs done by its 91 members and referrals of IATSE Local 322, over 35 unemployed Charlotte residents were also employed during the convention through a partnership with Goodwill Industries.

The International Alliance of Theatrical Stage Employes, Moving Picture Technicians, Artists and Allied Crafts of the United States, Its Territories and Canada, AFL-CIO, CLC (IATSE) is the labor union representing technicians, artisans and craftspersons in the entertainment industry, including live theatre, motion picture and television production, and trade shows. The IATSE is the largest labor union in the entertainment and related industries with a membership of over 113,000 members.

IATSE Local 322 received its charter on February 13, 1914, and plays an active role in the performing arts, live concerts, and trade shows in Charlotte by providing skilled stagehands and technicians for these events.

Paying in full is preferred.  Please make checks out to IATSE Local 322.  They can be mailed to: